From activist to PhD: Olivia wants to create solutions herself

As a climate activist, Olivia demanded action but got no result. So she decided to take up the fight against her own dyslexia, and today she develops green solutions as a PhD student at DTU.

A giant ‘human snake’ moves down Amagerbrogade. It carries above it messages like ‘Change the politics, not the climate’ and below it are the feet of a total of 100,000 protesters.

The year is 2009 and somewhere in the crowd is 18-year-old activist Olivia Fjord Sloth. Prior to the demonstration, she has followed the press coverage of the current COP 15 climate summit, which is held in Copenhagen, and now she can no longer sit still.

“Climate change is one of the most important things for me and there are so many words during that summit, but virtually no action. I’m part of this crowd, part of the people protesting, because I want to show that I want solutions now,” says Olivia Fjord, who at this time regularly goes to demonstrations.

Still, today's demo will turn out quite different from her previous experiences.

Without warning, police officers from both sides storm towards the part of the demonstration where Olivia is walking.

Through a so-called pincer maneuver, she, along with hundreds of other protesters, is forced into a narrow, secluded fold, and without taking behavior or expression into account, the officers begin to arrest them - one by one. Olivia receives the same treatment and is then directed down in a ‘train’ on the frost-cold ground. Here she sits still and waits while the hours go by.

"It's really uncomfortable and traumatic. Subsequently, I'm pretty scared of the police, and I decide that I have to find another way to express myself than to be an activist," she says.

A total of 1.915 people were arrested during the COP 15 demonstration in Copenhagen. Of these, 178 were placed in the ‘trains’ on the ground because the police did not have enough buses to take them away. The mass arrests have later been called a ‘blunder’, and according to a 2012 verdict from Østre Landsret they were also illegal.

However, this did not change Olivia's decision. She wanted to demonstrate less and make a bigger difference. The question was just how?

The meeting in Canada

It was not expected that the answer to that question would be a PhD at DTU Physics.

Olivia Sloth is dyslexic and going to school was unmanageable. Through primary school she had experienced that the most important thing was to be able to read and spell correctly, while the creativity and wealth of ideas she possessed was neither noticed nor rewarded.

So when primary school was finally over, she wanted to live out the dream of creating a better world. She moved into a house community with other young people, became a climate activist and started as a circus artist at the creative performing arts school AFUK. Still, she had a feeling of emptiness inside.

"I did not feel that I was really making a difference, and I had a clear idea that I wanted to," says Olivia, who after the arrest at the COP 15 demonstration needed a break away from it all.

She traveled to Iceland and then to Vancouver Island, Canada, where she grew vegetables on an organic farm. Here she was presented with an opportunity she had never considered before.

"I met a woman who had studied glacier technology in Svalbard. She told me how she, through her science, could really help save the planet, and then I thought: That’s it! That's what I want."

Olivia had no other academic education than her primary school, but despite dyslexia and poor school experiences, she was determined. When she returned home, she started at the adult education course, VUC. The goal was to study engineering at DTU.

Today, banners and slogans have been replaced with a permanent PhD position at DTU Physics.

Olivia no longer spends time on climate demonstrations, but on developing solutions that can create a more sustainable future. At her permanent spot in the laboratory is a set-up she has built herself, which by splitting water at high temperatures is intended to produce the green fuel hydrogen.

She still dreams of making a difference for the climate, but the method has changed and it makes sense.

"Working with solutions means that you take power into your own hands. So instead of saying that others must do something, or it is the others who have a responsibility, I now feel that I take a responsibility myself and it gives me a lot more value to do something myself," she explains.

Despite the dyslexia, in nine years Olivia has managed to complete a high school degree, a bachelor and master degree in physics and nanotechnology and get a PhD position at DTU Physics, of which she now has a year left.

"It has been insanely hard, no doubt. But in engineering there are so many other things that are more important than spelling or reading. For example, I have been skilled at doing data processing, and I find it fun to fix problems. I've never been very good at school, but I've always been inquisitive. And I've been able to use that here," says Olivia.

"It's easier to get through an education when you feel it has a meaning in the end. If you think about the work you'll get that will have an impact on what you want with your life, it will be a little easier to write the assignment that you think is boring or difficult, "she says.

When Olivia finishes her PhD in a year she plans to continue developing solutions that can create a greener and more sustainable future.

Read more about Olivias bachelor and master degree in Physics and Nanotechnoly here. 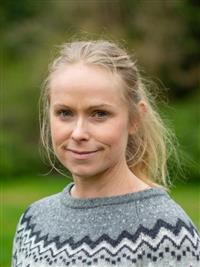