Research on ‘the inner life’ of metals

On 4 May 2022, it will be celebrated, that Professor, Dr. Techn., Dorte Juul Jensen receives the Villum Kann Rasmussen Annual Award for Technical and Scientific Research of DKK 5 million.

She has been called a pioneer, groundbreaking, unstoppable, and the woman who can see into metals. And with good reason. In a career spanning 41 years, Professor, Dr.Techn., Dorte Juul Jensen from DTU Construct has developed novel experimental techniques for studying metals in two, three, and four dimensions. It has enabled her to advance the characterization of metal microstructures and to understand some aspects of why the metals behave as they do.
Her research has contributed to solving a number scientific problems and is used to produce new, stronger, and more formable materials that can ultimately save resources and energy.

Now, it will be marked that she receives the Villum Kann Rasmussen's Annual Award for Technical and Scientific Research of DKK 5 million for her contribution to materials science at an international high level.

“The award is a unique recognition of my work and means I can expand my research towards understanding the complicated microstructural evolutions occurring in 3D-printed metals when exposed to mechanical or thermal loads. Only when we understand what is really going on inside the metals, we can improve them for the benefit of society,” says Dorte Juul Jensen.

Fascinated by metals
She grew up in Birkerød. As far back as she can remember, she has always liked understanding something new— dismantling mechanical objects and reassembling them. Her interest may have come from her grandfather, who was an engineer at Elsinore Shipyard and to whom Dorte was closely attached. She also thinks that she has inherited his pleasure in travelling, which is a big plus as a researcher in an international environment.

In high school, Dorte Juul Jensen took the upper secondary school leaving examination in Mathematics and Physics from Marie Kruses Skole in Farum. She then enrolled at the then DTH, which later became DTU. Here she studied electrophysics and followed many courses in nuclear physics, as she wanted to work in the nuclear field. But fate would have it that a PhD project was opened in the Materials Research Department at Risø. Here, they thought that Dorte’s knowledge of neutrons could be used to solve challenges in characterizing materials. It was sheer luck—according to herself—and it created the basis for her fascination with metals.

“Metals are incredibly exciting. They are used everywhere from small, precise components to mega-large structures. For example, aluminium is used for tinfoil, cans, and airplanes, while steel is used for injection needles, train tracks, and strong bridge cables. It’s deeply fascinating. Many people think that metals are completely boring and just something you take from the shelf. Forget it. In modern society, every piece of metal has been optimized precisely for what it’s to be used for. I don’t think that we can live without metals—now or in the future,” says Dorte Juul Jensen.

While her two daughters were young, she drove home during her lunch break, picked them up from kindergarten, and had lunch with them. In the afternoon, a nanny came to look after the girls until her husband came home, and Dorte could get back to work. At the time, Dorte’s husband worked in the Danish Women Workers’ Union, and there it was popular that he took paternity leave and days off when the children were ill.

Later, Dorte Juul Jensen became Denmark’s first female Dr. Techn. This resulted in the then Minister for Research—Jytte Hilden—appointing her as chair of the Research Forum of the Ministry of Research. She was later appointed head of a research department as the first woman in Risø’s history.

“For me, research is a fantastic job because you organize your own days to a large extent. I value that freedom extremely highly, and I certainly believe such freedom drives research forward. In fact, you don’t get the best ideas sitting in front of your computer. They often come when—for example—you’re playing with your children and have time to think outside the box and try something new,” says Dorte Juul Jensen.

The industry also uses her knowledge to optimize materials in areas such as electric transformers, rails, as well as beverage cans. Her research has also provided significant input to the automotive industry, where the steel for each individual part is carefully selected and optimized. Here, it is important that the car is as light as possible to reduce consumption of petrol and electricity, and some parts must be extremely strong to protect passengers in case of a collision.

The research is based on a number of breakthroughs in the characterization of materials. The first breakthrough came around 1990, when Dorte Juul Jensen—together with Professor Knut Conradsen from DTU Compute and a PhD student—automated a technique that has today become one of the most widely used tools for characterizing materials on the microscale.

The technique is called Electron Backscatter Diffraction (EBSD) and it is performed in a high-resolution electron microscope. The method helps universities and industrial companies worldwide to for example understand where and why materials crack. Such knowledge makes it possible to reduce the use of metals and thus save resources.

However, one challenge with the EBSD technology is that you can only see the metals in two dimensions. Therefore, Dorte Juul Jensen took the method a step further together with Professor Henning Friis Poulsen, now at DTU Physics. By using X-rays from the large synchrotrons in Germany and France, they were able to develop a method for analysing metals in both three and four dimensions. They could thus see directly into the internal microstructures of the metals and concurrently follow how the metals developed over time.

The research became a scientific breakthrough, and—with support from the Danish National Research Foundation—Dorte and Henning had the opportunity to build a dream team for developing the new method and improving the understanding of metals.

The work defined new standards, and there is today great international interest in characterizing metals in three and four dimensions. The research also brought a so-called ERC Advanced Grant, which Dorte Juul Jensen and her present research group use to develop a similar tool that researchers can use in their home laboratories.

“The challenge of studying the internal metal microstructures using X-rays from synchrotron sources is that many researchers find it difficult to get the sufficient access to large international facilities. The sources are in great demand, and there is not time for long-term testing. My dream is therefore to develop a technology that researchers can use in their own laboratories. Here they can conduct many experiments, and test and characterize the metal over several weeks or months if needed,” says Dorte Juul Jensen.

Much we do not understand about metals
Today, she is very interested in the local microstructural variations, which are present in all metals. Such variations mean that for example, the strength is not the same throughout the metal, which has resulted in the need for large safety factors and thus engineers have had to over- dimension the metal in their design, says Dorte Juul Jensen. As an example, she mentions that the bridge cables on the new Great Belt Bridge are much slimmer than the bridge cables on the older Golden Gate Bridge in the United States:

“If you look at old bridge structures, they are often significantly heavier than today’s structures. I believe that 3D and 4D characterization can help us understand defects that occur beneath the surface—and that we don’t see in 2D. If we’re truly to understand the properties of a metal, we need to understand its microstructures in 4D and include residual strains as well.”

“There is still a lot that we don’t understand about the ‘internal life’ of metals— and to me this research is deeply fascinating. There is so much to study, and I look forward to using the grant to remain at the forefront of this work.”

Grants:
In 2018, Dorte Juul Jensen received an ERC Advanced Grant for developing an instrument that can analyse microstructures in four dimensions and use it for studying local variations in metallic materials.

In 2022, she received an ERC PoC grant to further develop the instrument to look into the internal structures of the metals in four dimensions 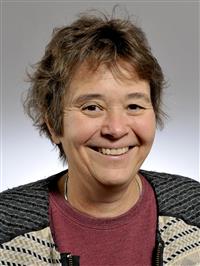