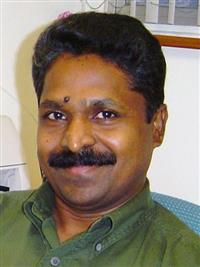 Sadasivan Puthusserypady received his B.Tech degree in Electrical Engineering (1986) and the M.Tech degree in Instrumentation and Control Systems Engineering (1989) from the University of Calicut, India. In 1995, he obtained his Ph.D. degree in Electrical Communication Engineering from the Indian Institute of Science, Bangalore, India. He was a Research Associate at the Department of Psychopharmacology, NIMHANS, Bangalore, India, during 1993-1996. From 1996 to 1998, he was a Postdoctoral Research Fellow at the Communications Research Laboratory, McMaster University in Hamilton, Ontario, Canada. In 1998, he joined Raytheon Systems Canada Ltd.,Waterloo, Ontario, as a Senior Systems Engineer. In 2000, he moved to the National University of Singapore and worked as an Assistant Professor in the Department of Electrical and Computer Engineering until 2009. Currently, he is an Associate Professor at the Department of Electrical Engineering, Technical University of Denmark, Denmark. His research interests are in Biomedical Signal Processing, Brain-Computer Interfaces (BCIs) and Home Health Care systems.