Electromagnetism was discovered 200 years ago by Hans Christian Ørsted.

It happened during an experiment in which Ørsted passed an electrical current through a platinum wire across a compass. The current caused the magnetic needle in the compass to move slightly. In so doing,

Ørsted had discovered the connection between electricity and magnetism, which he went on to call electromagnetism.

The discovery led to a host of other discoveries in the nineteenth century, and laid the foundation for our modern society. Among other things, the telephone, the radio, and the electric motor were all made possible following the discovery of electromagnetism. These then provided a springboard to more advanced uses such as hearing aids, lasers, radar, security systems, and other newer applications.

But what was it in fact that Hans Christian Ørsted discovered?

Ørsted discovered the link between electricity and magnetism. Up until that point, the two disciplines were considered to be completely separate. Electricity was linked to charges and static electricity, batteries, current, and lightning. Magnetism on the other hand revolved around rod magnets, south and north poles, and compass needles, but without any connection being made to charges in movement and thus electricity.

Plane electromagnetic waves, which can propagate even in empty space. They have both an electric field (E) and a magnetic field (H), and they are oriented as shown in the figure.

Today, we consider electromagnetism to be one of the four fundamental forces of nature. The others are gravity, the strong nuclear force, and the weak nuclear force. The nuclear forces are only at play within the atom, so we do not experience them in our daily lives. Gravity, meanwhile, is very obvious to us.

Electromagnetic forces vary in terms of both their size and direction, and exist in a three-dimensional space. Very high frequencies like light, which is also an electromagnetic field, are visible to the human eye. On the other hand, fields like radio waves, microwaves, X-rays, and UV waves are invisible and can be hard to envisage.

At DTU, we conduct research, among other things, into how to apply electromagnetism in newer and better ways.

Part of the research focuses on electromagnetic waves, in particular microwave technology for wireless communication and remote sensing which is used in mobile phones, radar, satellites, medical devices, and security systems.

The research is contributing, for example, to the expansion of the mobile internet, and making it possible to access the internet even from an aircraft via satellites. Or developing energy transfer so that it is possible to charge a mobile phone wirelessly, or EVs via the roadway.

Mobile internet on aircraft and measurement of the Earth’s biomass

Much of DTU’s research focuses on improving antennas and the measurement techniques which are used on satellites.

This ensures, on the one hand, improvements to our GPS coverage, but also contributes to achieving the objectives of the satellite missions being run by the European Space Agency (ESA).

This applies to the upcoming BIOMASS mission, where radar antennas will measure the Earth’s biomass in order to detect and monitor future changes to our climate. And to the Jupiter-2022 mission JUpiter ICy moons Explorer (JUICE), which will measure water on Jupiter’s moons to detect whether there are any signs of life.

Even though 200 years have passed since Ørsted first discovered electromagnetism, research within the field continues to grow.

A greater understanding of fundamental electromagnetism is necessary in order to meet the demand for an increasingly digital society, and where more and more has to be done both online and wirelessly.

In the coming years, the research will also be marked by major technological advances such as 5G wireless networks and nanoscale electromagnetism.

The latter holds considerable potential within, for example, medical applications, where nanoparticles can be used for cancer treatment and materials development. New photonic materials with non-naturally-occurring properties can thus become a reality, benefiting future communication technologies.

DTU is currently building a new electromagnetic test centre which is due to be completed in 2022.

The new centre which is unique in Europe is being built right next to the University’s existing laboratory, the DTU-ESA Spherical Near-Field Antenna Test Facility, where DTU carries out measurements for ESA. These happen in the anechoic laboratory under the same conditions as in outer space. 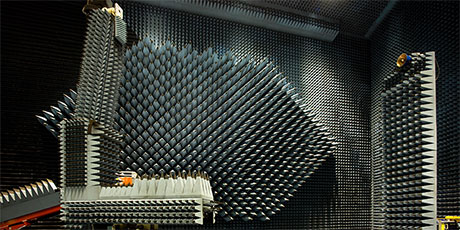 The new electromagnetic test centre will eventually house several anechoic laboratories, making it possible to carry out different types of measurements on antennas and circuits in the entire microwave frequency range, from 300 MHz to 300 GHz.

This is unique in an international context, and will make it possible for researchers to increase our knowledge of electromagnetism. The new centre will also pave the way for increased collaboration with both Danish and foreign companies.

The centre will also house a large experimental teaching laboratory for DTU students. And in step with the growth in online and wireless functionality, the level of interest in electromagnetism among students has also increased. This is, not least, driven by their curiosity in knowing about the impact of the many different gadgets they use on a daily basis, and the possibilities they offer.