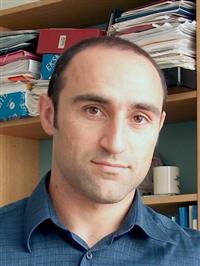 Borislav Tomov received an M.Sc. degree in electrical engineering in 1996 from the Technical University of Bulgaria. Between September 1996 to September 1997 he served his obligatory military service as a radar technician. From the end of 1997 to June 1999 he was with Petrol Engineering LTD - Sofia as a point-of-sale system designer. During September and October 1999 he was a research assistant at the Center for Fast Ultrasound at DTU. He obtained a Ph.D. degree at the Center in 2003 for his work on compact beamforming in medical ultrasound scanners. Since 2003 he has been employed at the Center as an assistan professor. He is currenty participating in building the largest experimental ultrasound scanner in the world, capable or real-time 2D/3D synthetic aperture imaging and  2D/3D vector flow estimation, with 1000 channels.